I started out in the trading world by studying patterns in the charts in pre-PC days. We were all called chartists then and used pencil and chart paper to hand-draw the high/low/close for the day. And one of the most elementary patterns we studied was the straight line. It is uncanny how often major highs and lows would line up on a straight line. They still do. Here is an example on the hourly chart of GBP/USD 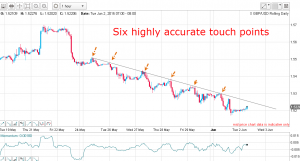 Now, what tells the market to hit and bounce off this line when it touches it? Beats me, but it does. This line with six touch points is a very reliable line of resistance.

Note that this provides a basic trading system: Short the market when the market hits the down-sloping line from below (and vice versa for an up-sloping line).

In fact, if this were your only trading method, you could have a complete system, when used with simple stop loss rules!

This is what happens when the line of resistance is broken:

The line now becomes support and a buy-stop placed above the line (before it broke above) would have caught the powerful surge – and a long trade would result, and be in profit right away.

This is a very useful technique that I use a lot.

Here are the three pillars of my tramline method (described in detail in my book Tramline Trading).

So when I started to look at this straight line effect, I noted that often the market will trade in the trading channel between two straight and parallel lines. I have called these lines tramlines, for obvious reasons – the market travels in time between the tramlines. Here is a good example in the daily chart of Easyjet:

Since June 2014, the market has traded up between my green tramlines until it broke out of the channel in May 2015 – a period of eleven months.

You can even find tramlines on the weekly charts as well as on the hourly. They are everywhere!

I have devised rules for trading the tramlines which are explained in my book Tramline Trading.

The tramline concept is just one of the three pillars of my Tramline Trading method. Here are the other two:

Another uncanny observation is that often, when a market makes a move up or down, it will retrace anywhere from 50% to 62% of the initial move and then make a turn.

Here is a good example on the weekly chart of GBP/USD: 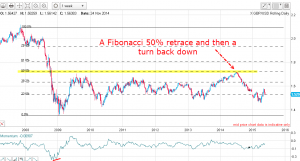 The big move down occurred in 2008 and six years later, the market made a direct hit on the Fibonacci 50% retrace and turned. How’s that for a long memory for the market? Uncanny, isn’t it?

Uncanny or not, I use this effect to judge many of my trades – and at low risk by being able to place a close stop.

The most basic concept in EWT is this: large bull or bear moves occur in five major waves (three waves (1,3,5) in the main direction and two waves (2 and 4) counter-trend).

And I can use the very same long-range chart above to illustrate: 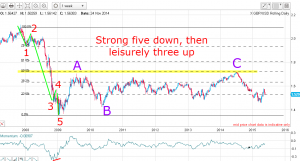 The strongly-trending five down is a motive wave with a long and strong third wave. When the fifth wave completed, the counter-trend A-B-C has taken six years to form.

One of my top five setups is trading third waves. Here is a chart of T-Bonds, which is in two third waves of different degrees: 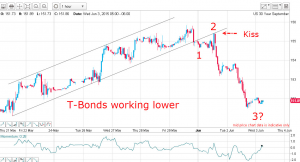 The market broke out of the trading channel between my tramlines, planted a traditional kiss on the lower tramline, and then made a ‘scalded cat bounce’ down. The sheer power of the decline is a give-away that the market is in at least one third wave.

Putting it all together

That’s what I do for VIP Club members. I employ my 3% Rule and Break-even Rule in conjunction with my split bet strategy. I rigidly observe strict money management principles.

OK, we have a trade on at £4 a pip and our stop is 60 pips away from entry. This is typical for my Dow and EUR/USD trades.

Let’s say the market moves in our direction and we have a paper profit of 100 pips or so. Because this move represents about 150% of initial risk, we can move our PS to our entry price. That means if the market suddenly comes back, we are stopped out at break even, taking no loss – and protecting capital.

Of course, you can adjust the amount of paper profit you must see before moving your PS. Some traders use 100% and others 300%. It is really your choice to suit your own personal risk profile.

The Split Bet Strategy
This is a very powerful weapon in my armoury. The simple idea is this: stake an even number of pounds on every bet. Consider one half as a short term trade and the other half as potentially longer term.

When the market has moved to a major target, consider taking profits on the first half. That profit is then banked.

Then, move your PS to break even on the other half. So if the market comes back and stops you out in the worst case scenario, you have banked the first profit and broken even on the second.

But if the market continues in your direction, all is well and you are making additional profits. You then have the luxury of taking the profit at another target.

Click here for your Free Trial to my VIP Traders Club

DON’T MISS OUT!
Subscribe to my blog
Be the first to get my blog posts straight to your inbox.
[mailpoet_form id="1"]
Give it a try, you can unsubscribe anytime.